Last week, the marvelous Cleveland poet, Miles Budimir, tagged me in The Next Big Thing, which is being described as “six degrees of separation meet a literary chain letter.” The idea is that you answer some interview questions and post them to your blog and tag some friends of yours who will do the same the following week. Below are my answers to the questions about my recent collection of poems “BACKCOUNTRY.” 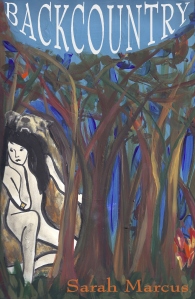 What is the title of the book?

The title of my chapbook is “BACKCOUNTRY.”

Where did the idea come from for the book?

I suppose the idea came from various versions of failed relationships. I am also, obviously, obsessed with bears. Naturally, bears became the symbol for all things wild and unsafe in this manuscript. I think I was seeking revival; these poems document that process in a non-linear narrative arc.

I am interested in wilderness and trauma narratives. For me, the idea of wilderness is not limited to the natural world.  Wilderness (or the backcountry) is any place where wildness still exists and where someone or something struggles for survival. In this way, addiction and imprisonment embody a type of wilderness. I think that poems provide space to reflect on our capacity to confront and to overcome.

What genre does your book fall under?

What actors would you choose to play the part of your characters in a movie rendition?

I think it would be really interesting (read devastating) to see these poems acted out again. I will say that I recently saw Silver Linings Playbook and Bradley Cooper’s character, newly “released” from a mental institution, was the right kind unaware, violent, and endearing. Although, he lacked the vicious selfishness that helped create and propel the characters in this book. Maybe a Basketball Diaries Leonardo DiCaprio and a Legends of the Fall Julia Ormond? What a fun question!

What is the one sentence synopsis of your book?

The familiar song of two people who can’t recognize that they are being “killed by the heat they thought would save them.”

How long did it take you to write the first draft of the manuscript?

Who or what inspired you to write this book?

I almost married the wrong person. There’s this Anne Lamott quote that says something like: “You own everything that happened to you. Tell your stories. If people wanted you to write warmly about them, they should’ve behaved better.” I am grateful to have people in my life who are brave enough to tell their stories.

There’s always something beautiful in tragedy. Not in an ironic, adolescent, romantic, “I will slit my wrists for you” sort of way, but in a “pain is a sincere catalyst for growth” sort of way. The splendor of survival is that we have something to give back. We are uniquely qualified to guide others through desolation, through the unbearable.

I write love poems. They are sometimes autobiographical. So, I’m sick of subscribing to the beliefs of a literary culture that teaches us (even if inadvertently) to use the label “confessional” as a pejorative that is disproportionately applied to poetry written by women. In this model, confessional becomes synonymous with depressed, suicidal, dramatic: the very patriarchal social constructions that we have been up against for centuries.

What else about your book might pique the reader’s interest?

Have I mentioned bears yet? How about coyotes… meth… prison!?

What I found most interesting was the way in which these characters kept returning to the same desperate spaces again and again despite all reason. The misconception of love is dangerous.

Is your book self-published or represented by an agency?

It is published by Finishing Line Press. You can preorder it here: https://www.finishinglinepress.com/product_info.php?products_id=1637

I am deeply grateful for everyone’s love & support! XO

The fabulous writers I’ve tagged for next Wednesday, February 20th are:

Bruce Covey (Bruce’s most recent books are Reveal from Bitter Cherry Books and Glass Is Really a Liquid from No Tell Books, and he is also Founder/Publisher/Editor at Coconut Poetry)

Abraham Smith (Abe is the author of Hank and Whim Man Mammon, from Action Books. Y’all should see him perform: HERE)

Allyson Armistead (Allyson was listed in Narrative Magazine as one of 30 Under 30 exceptional emerging authors and has been nominated for 2012 Best American Short Stories, Best New American Voices, a Pushcart Prize, and many others!)

Also, the always-incredible Kirsten Clodfelter answered these questions, too!

3 thoughts on “THE NEXT BIG THING”